This literal translation of words got me to thinking of the cabinet accessory Lazy Susan. Have you ever wondered how this round tray kitchen accessory got it’s name? Why not the Lazy Heather or Lazy Kimberly? I always felt silly referring to this accessory as a Lazy Susan. Every woman I have known named Susan has been smart as a whip, funny, and very intelligent. So where in the world did the Lazy Susan get it name? There is nothing lazy about this round tray device on ball bearings. But it is even sillier to describe it as a double duty round spinning tray on ball bearings. Obviously for the sake of clear communication, referring to this ball bearing wonder tray as a “Lazy Susan” seems to be a term everyone knows and understands. I don’t see us shortening the name anytime soon to L.S. or anything else.  For the full history of the Lazy Susan I will refer you to the well researched article written by Michael Quinion at the bottom of this commentary. It’s a very good article you must read if you have ever obsessed over the word Lazy Susan. 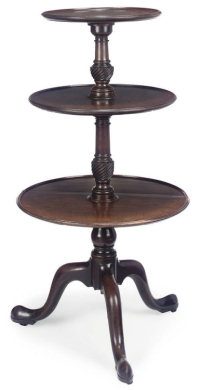 Americans seem to have a habit of shortening our words for some reason. Are we in such a hurry that we have no time to use our words properly? Have we just become “lazy” in using proper words? My pet peeve is the use of “my bad” as a way of saying “I’m sorry, I’ve made a terrible mistake and I am using the word “my bad” to be cute and a smart ass.” Who started this horrible phrase?


Shortening words is clearly a trend everywhere. My bank, Washington Mutual, referred to itself as WAMU in it’s marketing, although it was bought by another bank and is now known as Chase. Short enough, I can’t imagine how Chase would shorten it’s name. Big C. NO! Too many double entendres will erupt and not in a good way. Kentucky Fried Chicken also refers itself in commercials as KFC. I guess it’s one way companies try to keep up with it’s hipper customers? For example, mention the name P Diddy, and everyone knows who this is. Mention the name Sean John Combs and you might get a blank stare from the older crowd.


Motel 6 recently came out with a new commercial that picked up on this trend of shortening words. Did anyone hear it? It’s very funny and makes fun of our lazy habit of shortening words in order to appear hipper and cool. Motel 6 may be best known for a series of humorous radio and television ads featuring the folksy voice of writer and National Public Radio commentator Tom Bodett, with the tagline “We’ll leave the light on for you”.

You are currently browsing the Lazy Susan category at Kitchen Design Notes.